I visited a Viking Museum while in Stockholm. We had a guide that took us through the exhibits–I was surprised that they let us take photos. This picture shows a recreation of a Viking dress.

This stone is a Celtish pict stone-found along a roadway showing directions. Sweden has an interesting program to help preserve items of historical interest such as these. If you find something like this on your property and report it, they allow you to deduct the appraised value from your taxes. Even items as small as the bracelets in the next photo. 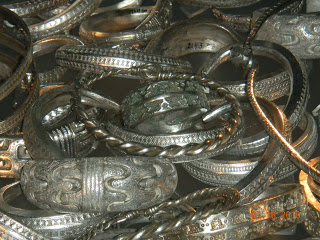 This skeleton is believed to be a 6 year old girl. 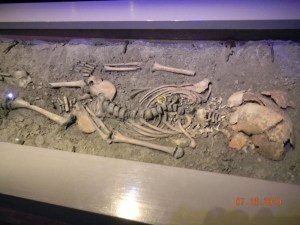 This bracelet and ring are reproductions of Viking jewelry. I bought them in the Museum gift shop. They are heavy silver. 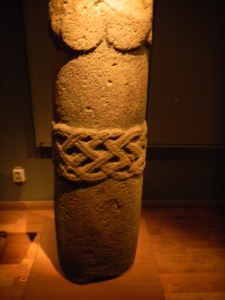 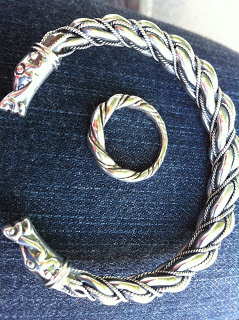 This painting depicts the burial grave of a Viking king. He is buried with items that he used (weapons) and things that are considered his prize possessions (see the horses, dogs) Our guide told us that the VIkings are always depicted with horns fixed onto their helmets, but that this is acutally not how they were used. The horns, according to her, were actually used for drinking and when these people were buried the drinking horns were set on either side of the head next to the helmet. She also said that they had been misrepresented in history as being berserkers but they were not at all like that. Interesting.

This is Anna’s in Gamlastan—the old part of Stockholm. Bought some interesting locally spun lace weight.

Sweden is an archipelago with many, many islands. Cruising into and out of the port you pass many islands like these with summer homes. They were beautiful–if they are home they have banners flying–

I was waiting for the bus to go back to the cruise ship and ate at this hot dog stand. Check out the hanging bags of mustard and ketchup.
This is part of the Royal Family’s residence. Stockholm itself is built on many islands connected by bridges. It was very clean, very beautiful.

DianaGabaldon.com
Cat Bordhi
Goddess Knitters
We Do Not Have A Knitting Problem
Yarn Harlot
Mad Man Knitting
it takes balls to knit!