Ahhh. St. Petersburg. I signed up for an excursion to The Hermitage, considered the largest museum in the world. With no AC and very few open windows. If I had it all to do over again, I would have taken one of those bus tours or a riverboat tour, where you drive by the historical buildings and you get a sense of the whole city. We had been cautioned about striking out on our own, as it is just not a good idea in this city. Also, as you will see later, the cruise boat terminal is new and on a reclaimed delta of the river Neva that runs through the city.
Our tour guide was a fountain of knowledge, this guy must have had a master’s in Renaissance Art. However, he did not know much about the architectural history, which would have been kind of interesting because it took about 30 minutes to get to the Hermitage.
Now, I failed to mention earlier that on the day we actually boarded the ship I started to have problems with my feet. The day we went to Berlin, for some reason, my feet started to swell. REALLY swell. I have no idea why. They got so bad that I bought some Birkenstocks-the Arizona style with the two straps. My feet were so swollen that the pooched out between the straps.
Keeping that in mind, think of wandering around a huge museum with a guy who is uber-art-articulate, especially inregards to the Dutch and Flemish Baroque artists of the 17th century. Mind you, there was a Picasso exhibition that he did not comment on and did not stop for us to see. He started by showing us this exhibit hall. I think this is Czar Nicholas. The smaller paintings around him in the second photo are his Generals–the ones who won their battles. Apparently if you didn’t win, you couldn’t hang with him, literally. The best part about this part of the museum was that these were interlocking gi-normous rooms with a few benches and seats. 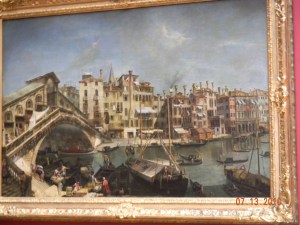 I was proud to recognize this painting as the Grand Canal in Venice and the Rialto Bridge. The second one is of St. Mark’s Basilica and Piazza. 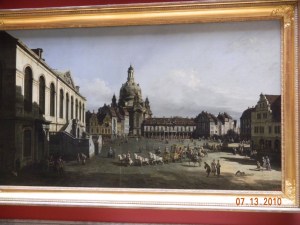 Most of the paintings that he wanted us to see were dark, 17h century Flemish and Dutch painters. Rubens, Rembrandt, etc. And lots of them portrayed Baby Jesus and Mary. Naked Baby Jesus, I might add, in all of them. After about 12 of these I kind of got numb and silly. The last one that I remember showed a Naked Baby Jesus at about 5 years of age with one of his home boys who was also naked. Mary was sitting on a chair. Naked Baby Jesus was holding a tablet with some kind of scribe and he looked like he was writing. I thought to myself that if he has the fine motor control to hold a pen of some type and write, why can’t they get him to wear some britches? 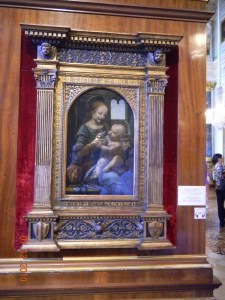 About this time, we got to what really make the museum trip for me, which was a tour of the “Gold Room” in the basement. It is temperature (yes!) and humidity and light controlled because these peices date from the 4th millennium BC to the early 20th century AD. And there were a lot of Viking and Celtic influences in these pieces. Shortly after this, when some of the others on our tour rebelled by going to the restroom, the tour guide stopped, although he was kind of miffed at us for having to go potty. I ditched out along with another person. We had had enough.

This is our ship–
This photo shows the reclaimed delta and the buildings in it are apartment buildings. Very severe and austere looking. Reminds me of the apartment buildings I saw in East Berlin when Carson and I were there in Spring 2005. Very stark and no color, very depressing. 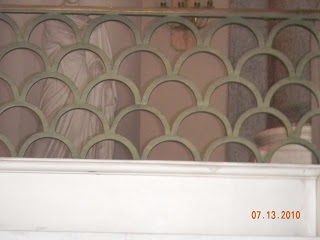 There were a lot inspirational patterns and motifs within the Hermitage, as these photos demonstrate.

At the cruise terminal, on the Russia side of Customs were a series of little gift shops. I texted these hats to Carson to see which one he liked best. We were in port for 2 days, but day 2 for me was a spa day (loved it!). 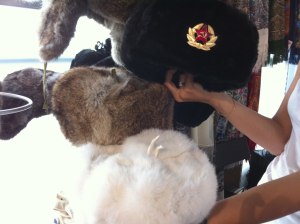 And here is the one he chose.

Up next: Helsinki Finland!

DianaGabaldon.com
Cat Bordhi
Goddess Knitters
We Do Not Have A Knitting Problem
Yarn Harlot
tin can knits