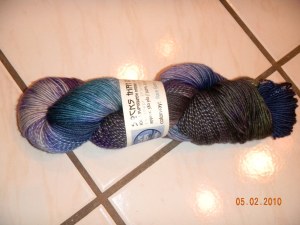 I bought this Rare Gem at Sock Camp 09, aka KnittyHaha. It was a mdwt STR and had two different kinds of yarn it that composed this skein. Half of it appears to be Silkie STR and the rest regular mdwt STR. I think the colorway is Crabby McCrabbypants. I decided to knit this shawl, aka TheTraveling Woman. 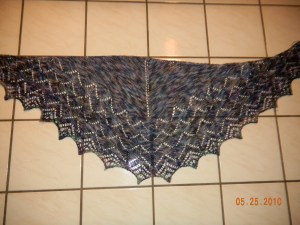 Here it is all blocked out. The SilkieSTR is on the top and when I broke out out to the patterned area, I went into the regular STR. It doesn’t show up so good in the photo, but in real life it looks heathered on the top and brighter on the bottom patterned section. 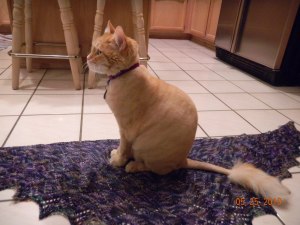 I went up 2 needle sizes from what was called for in the pattern because I wanted it really lacy. This ended up having me run short about 3 rows. I had a skein of ltwt McCrabby pants and so I went up a needle size for the last 3 rows and the bind off. You can’t tell. Even Tang can’t tell in this photo, as he gives it the final “Cat Scan”. Everything I knit seems to get Cat Scanned. 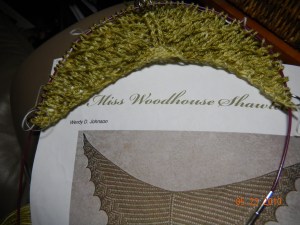 This Miss Woodhouse Shawl is blocking as I type. I knitted it in record time. There are two more shawls I want to knit before my cruise, so I am casting on the “Multnomah” Shawl from Ravelry in Silkie STR in the Grawk colorway (from the Ravens clan). I love all things Blue Moon Fiber Arts!